FenomenVideoPlayer
We finished our pre-season campaign in fine style by thrashing Sevilla 6-0 to claim the Emirates Cup, with Gabriel Jesus making an instant impression on his new supporters by grabbing a hat-trick.

A capacity crowd were treated to four goals in the opening 20 minutes, courtesy of braces from Bukayo Saka and Jesus, with the Brazilian striker completing his treble on 77 minutes before Eddie Nketiah got in on the act in the final minute.

The performance, clinical finishing and clean sheet ensured it was a wonderful afternoon’s work for Mikel Arteta’s men, who look well-prepared for the Premier League starting in six days’ time.

The atmosphere was buoyant at Emirates Stadium before kick-off, which only increased during the opening 20 minutes as we ran riot and found the net four times to stun our opponents.

The scoring began in the 10th minute when Martin Odegaard clipped a ball over the top for Saka to chase, who was inexplicably pushed over by Karim Rekik, leaving referee Andy Madley no option but to award a penalty, which Saka stroked home.

The lead was swiftly doubled two minutes later when Ben White’s crossfield pass picked out Jesus on the left touchline, who then found Granit Xhaka. After edging his way into the box, his low cross was parried by Bono into the path of the onrushing Jesus, who had the simple task of tucking the chance away.

And after giving the majority of supporters their first glimpse of his famous telephone celebration in Arsenal colours, he was at it again two minutes later. Again the threat came down the left but this time through Gabriel Martinelli, and with the Sevilla defence sleeping, a teasing cross allowed Jesus to race in behind and dispatch the delivery into the net.

Sevilla had completely lost their heads, and that was typified by our fourth goal. A routine pass back to Bono saw the goalkeeper fluff a weak clearance straight to Saka, whose first-time effort trickled through the shot-stopper’s legs to cap off an incredible start.

Glee was spreading around the stadium, and none more so than on the pitch, with Arteta’s team producing plenty of slick passing and looking threatening every time they entered the final third.

During a couple of rare forays forward for the visitors in the first half, Youssef En-Nesyri flashed a shot just wide before heading straight at Aaron Ramsdale - a feat Thomas Partey repeated following a corner, before a remarkable half ended with Bono clawing back some redemption by making a double save to deny both Jesus and Odegaard, and then denying Martinelli one-on-one.

It was a much tighter affair immediately after the break, with Rekik heading a corner just wide 10 minutes after the restart, but we were working through the gears again and after Jesus dragged an attempt from 25 yards wide, Oleksandr Zinchenko picked out Odegaard in the box but he blasted over.

Midway through the second half there was almost a delightful goal to cheer when Partey chipped a ball over the backline for Xhaka, and his side-footed volley narrowly missed the top corner, but on 77 minutes the long wait for another goal ended.

A Martinelli corner caused havoc as Gabriel forced Bono into a close-range save, but Jesus was on hand to drive home the rebound, complete his treble and register his seventh goal in just five pre-season outings.

White almost put the cap on the result when a clever free-kick routine saw him attempt to lob Bono but it drifted wide, but in the final minute a sixth was added when Xhaka showed good skill to play in Martinelli, and after carrying the ball 40 yards the Brazilian unselfishly squared to Nketiah to complete the rout.

The final whistle was greeted with rapturous applause by those in attendance, who stayed to watch Odegaard get his hands on the Emirates Cup trophy to mark our sixth triumph in the competition’s history. 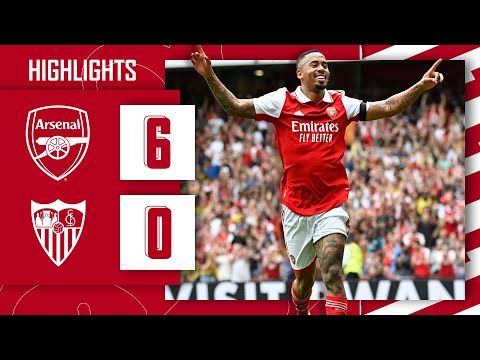 We finished our pre-season campaign in fine style by thrashing Sevilla 6-0 to claim the Emirates Cup, with Gabriel Jesus making an instant impression ...