About National Geographic:
National Geographic is the world's premium destination for science, exploration, and adventure. Through their world-class scientists, photographers, journalists, and filmmakers, Nat Geo gets you closer to the stories that matter and past the edge of what's possible.

For the first time in centuries, scientists have exposed the original surface of what is traditionally considered the tomb of Jesus Christ. As the slab of marble was removed, revealing the Holy Bed, conservationists were surprised to discover something their instruments hadn’t detected: a layer of debris beneath the marble cover. They will analyze the debris to learn more about the ancient resting place.

Located in the Church of the Holy Sepulchre in the Old City of Jerusalem, the tomb has been covered by marble cladding since at least A.D. 1555, and most likely centuries earlier. The modest tomb has never before been photographed, and no drawings exist. This is the first time anyone alive today has seen the Holy Bed.

This burial shelf is now enclosed by a small structure known as the Edicule (from the Latin aedicule, or "little house"), which was last reconstructed in 1808-1810 after being destroyed in a fire. The Edicule and the interior tomb are currently undergoing restoration by a team of scientists from the National Technical University of Athens under the direction of Chief Scientific Supervisor Professor Antonia Moropoulou.

The National Geographic Society, with the blessing of the Greek Orthodox Patriarch of Jerusalem and other religious communities, formed a strategic alliance with the National Technical University of Athens for cultural heritage preservation. For an exclusive look at the restoration project, watch Explorer on National Geographic Channel, coming in November. 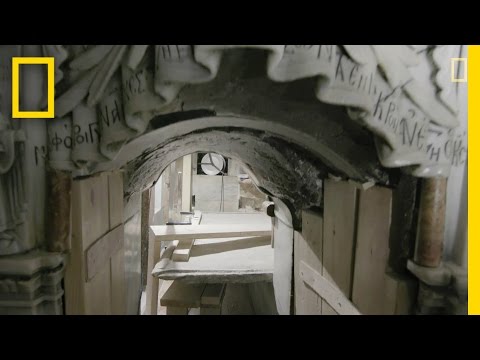