http://askmikeburg.com - For anyone dealing with an insurance claim, Mike illuminates the pitfalls of the comforting insurance agents. He warns how some insurance companies try to trick people who have been injured so the insurer doesn’t have to pay their claims. “The insurance companies are not your friend,” Mike says. “They are there to make sure you get zero for your injury.” One of the key things to watch out for is being asked to submit to an “independent medical exam,” which he says it often anything but, as these doctors are hired by insurance companies to discredit your injuries.

Since being admitted to the practice of law in 1976, Mike Burg has enjoyed a highly successful career that clearly places him at the pinnacle of the legal profession. He is an outstanding trial attorney who has dedicated his life to fighting for the underdog, and to protecting the rights of Americans to a trial by jury.

Mike is the recipient of numerous legal awards, including the Clarence Darrow Award, the American Association for Justice Heavy Lifting Award, and the Weidemann Wysocki Award. In 2016, he was named the Denver Lawyer of the Year for Product Liability Litigation – Plaintiffs, by Best Lawyers® in America. Additionally, he was named one of the Top 50 Trial Attorneys in America by the Legal 500 from 2012 through 2015, and was named Lawyer of the Year in Products Liability by Best Lawyers in America in 2015.

In 2013, Michael was named Lawyer of the Year by Best Lawyers in America for Mass Tort Litigation / Class Actions – Plaintiffs. Additionally, Law Week Colorado named Mike the Lawyer of the Decade from 2000-2010. He is Past President of the National Trial Lawyers (2010).

Mike has been appointed to numerous leadership positions by Federal Judges around the country in a variety of high-profile Multi District Litigations, including being co-lead attorney in the Ortho Evra and Yaz/Yasmin litigations, which resulted in settlements of over $3 Billion dollars. He continues to actively practice law in the areas of catastrophic personal injury and commercial litigation and has won numerous verdicts for his clients, over twenty of which have been in excess of $1M.

In addition to his many accolades, in April of 2016 Michael will be inducted into the Trial Lawyers Hall of Fame which is located at Temple University Law School in Philadelphia, Pennsylvania.

When you need a lawyer, don’t settle for less than the best. Learn more at: http://askmikeburg.com/ 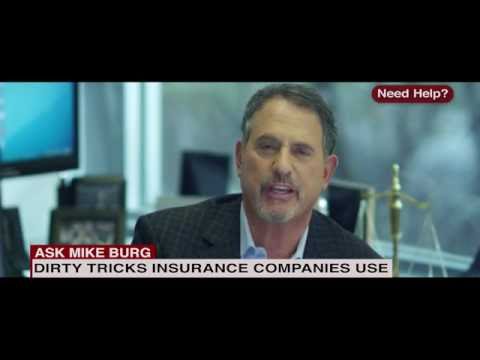 http://askmikeburg.com - For anyone dealing with an insurance claim, Mike illuminates the pitfalls of the comforting insurance agents. He warns how so...